All of us know that most climbing accidents occur during rappelling. There are inherent dangers involved in rappelling. You have got to be extremely cautious while you participate in climbing sessions. You have to be doubly sure that your anchors are sturdy.

Besides, you can also choose to rappel with alternative techniques like the Australian rappel. The Australian Rappel appears to be a movie stunt. Here the rappeler sprints down at a fast speed and stops at just the right moment. This technique was made famous by the Australian army. In this case, the soldier can belay himself with his left hand.

Also, he can keep the other hand free for shooting with a gun. You can imagine an Australian rappel to be full of action. They jump from helicopters or slide by the side of tall buildings very fast. Although I have never rappelled with a gun, I do enjoy infrequent Australian rappelling.

What is Australian Rappel?

Australian rappelling (also known as Australian abseiling, Angel Jumping, Rap Jumping, or deepelling) is the process of abseiling a fixed static rope in an upright position with your face looking at the ground.

Rap Jumping is derived from Macka's style and the Carabiner Rundown, a type of rope work pioneered by the Australian Army in the late 1960s. Because of its origin, it is also known internationally as Aussie Rappel. As early as 1988, Macka MacKail named his style of forward free-fall jumping "Rap Jumping" and based it in Cairns, Australia. When Macka MacKail served with the Australian Special Air Service Regiment (SASR), he earned his certification.

The Australian Defense Force has three branches: the army, the navy, and the air force. Rapid abseiling training allows a large number of soldiers to quickly land from helicopters to the ground, reducing the risk of helicopter exposure.

This is an essential skill training for the three armies of the navy, the army, and the air force as US-Australia economic and military cooperation intensifies.

Can You Do an Australian Rappel from a Helicopter? 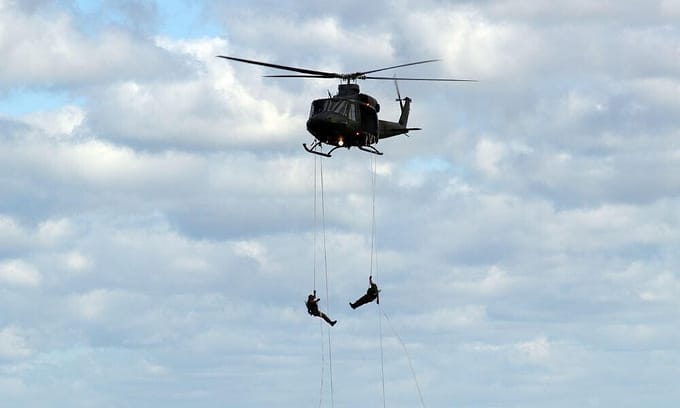 What Do You Need for Australian Rappel?

For Australian rappel you will need to have the following rappelling equipment.

How to Do an Australian Rappel?

Well, the Australian rappel can be done in three main ways.

We have provided full details of how to do the Aussie rappel in three ways. Moreover, you can try some other unique tricks to rappel: Simul Rappel, Cave Rappelling, Waterfall Rappelling, and the Inverted Rappel.

This is the easiest method to do Australian rappelling. Here, you can rotate your body by 90 to 180 degrees than a usual rappel. You can apply brakes as usual by raising the downhill hand upwards.

An ATC or 8-figure can be used as a rappel device. But avoid wearing loose clothes. You can learn more about rappelling with these devices by clicking the following links: 8-ring, ATC.

View on Amazon: Prices and Reviews

If you rappel sideways, the belay device is wrongly positioned, and the ropes may snag your shirt. The best advantage of this method is that it is reasonably simple and easy to set up.

Moreover, if things go out of control, you can come back to a regular position. Also, remember to use a fireman's belay to control if something goes out of hand. Overall, this method is the best one to experience the thrill of going down at high speed for the first time.

It is the most usual way of doing an Australian rappel. You wear the harness backward. You can apply brakes with the downhill hand by pulling it across in front of you.

The major problem with such a method is that a harness is not designed to be used this way. If you lose control and want the belayer to stop you from falling, the sudden impact arches your body incorrectly.

This situation can lead to an injury due to a jerk. Some rappelers put the harness on as usual but clip the belay and carabiner on the harness' back. Although the back of the waist strap is strong, it is not designed to carry loads.

The positive side of this method is that you can use it with a single hand without any additional gear. However, since the rigging rappel goes behind your back, you may need someone's help to tie and check.

It is the military way of doing the Aussie Rappel. A specially designed harness has a small sling along with a belay device added to the carabiner. For instance, the CMC Rescue harness has several loops for bearing loads.

Enhanced with a new Fall Arrest Indicator and work-positioning side D-rings, the Fire-Rescue Harness remains one of the most versatile, multiple-use harnesses available.

View on Amazon: Prices and Reviews

Afterward, it is connected to the harness back with a load-bearing strap. This way, the climber can set up his Rappel without depending upon a partner's help. Hence, there is no risk of incorrect settings or clothes or hair getting in the way of Rappel. The climber can brake by pulling his hand across the chest.

Military groups prefer the Australian rappelling method because they can hold a gun in the idle hand while rappelling down. The real-life application of this method is rare. Still, you can imagine that it would be fun to train a gun on the ground while cruising down.

What is Inverted Australian Rappel or Rappelling Upside Down?

When you want to rappel upside down, you start as usual. But when you are off the cliff and hang free, you may put your legs up and head downward. It works better with a caving harness with your belay device somewhat higher on your body. There is a risk involved that the rappeller may fall out of the harness.

Additionally, the blood rushes to the head, and you may pass out. Moreover, if anything goes wrong, your face will smash to the ground first. Hence, you must use the belayer device to avoid any accident. But it is pleasant for onlookers to watch!

What are the Risks Involved with the Australian Rappelling Technique?

Most of the climbers are obsessed with safety, and they hate the Aussie style of rappelling. This rappelling sport already carries a stigma of danger and recklessness. Most of the world hates it. That is why climbers don't like to add additional risks.

If you try to do Australian rappelling at the crag, some of the visitors will mostly approach you. Some of them will try to talk you out of this dangerous option. But, I feel the world is overreacting. Although it involves danger, it doesn't deserve so much hate. Let us see a few safety ideas to get out of this stigma.

Loose clothing and longer hair could come in the way. It can happen because the belay device and the cord can be in pretty irregular areas.

Ropes usually twist around you, and friends' help may be required to set you up. Ensure a smooth rigging and knot setting when others help you to set up. You must check the flow before you start the real thing.

It will help if you have a friend waiting at the bottom with a belay. There are chances of losing hold or tripping, particularly at a higher speed.

While practicing the Australian Rappel, you will be positioned in all sorts of poses, stretching, clinging to the top, and getting into the correct position for the next move. Rappelling is a prime example of endurance, as adventure teaches you life endurance skills.

You can't beat a breathtaking challenge to get your blood pumping in the thrill of conquering a rock face. Out on the cliff, you are using your body in an experience that is highly satisfying for your mind as well.

Concentrating your energy on something else gives you a new perspective that sharpens your understanding of huge problems with enormous risks. Besides relieving fear and building confidence, the Australian Rappel teaches you to trust your rappelling gear like never before.

Why is It Called Australian Rappel?

It is called Australian rappel  because the technique was developed by the Australian Army in the late 1960s, known as the "Carabiner Rundown" or Australian Rappel because of its origins.

Why is Rappel Upside Down?

Rappelling upside-down lets the assailant to check underneath the window, by not exposing themselves to the room inside. It's much easier than trying to enter in while shooting a trap. That's a sure way to get shot.