This side-by-side comparison review discusses which ropes handle the best, weigh the least, last the longest and provide the most dynamic and softest catches. Our professional climbing gear testing team obtained this information at the expense of many climbers who aren't afraid to take falls.

We test ropes all year at famous destinations, our local sport crags, and big mountains, all to bring you the top advice, regardless of the length or diameter of the climbing rope you are looking for. Let's jump and see which are the best climbing ropes on the market.

#9 Best Climbing Rope on a Budget

Confused about the Different Types of Climbing Ropes?

1) What does dynamic elongation mean on a climbing rope?

Dynamic elongation on a climbing rope measures the length a rope can stretch with a dynamic weighted fall. The standard dynamic test is used to measure dynamic elongation using an 80kg weight, and the measurement is taken of the first drop.

2) What is the meaning of static elongation on the climbing rope?

Static elongation on a climbing rope measures how long the rope stretches under a static weight. The weight is not falling, and the application is equivalent to you hanging on a rope not falling but just hanging in place. The standard test uses a static 80kg weight, and the accepted standard static elongation for a single-use rope is equal to or less than 10%.

3) What does impact force mean on the climbing rope?

The impact force on a climbing rope is the measure of force that a fall exerts on the climber and their gear during a UIAA (The International Climbing and Mountaineering Federation). A lower impact force is safe for your gear and yourself, especially internal organs, as it reduces your stress during a fall. The impact force is directly related to dynamic elongation such that the higher stretch your rope has from a fall, the lower the impact fall.

However, it may not always be excellent to have a lower impact force as this may translate to having a higher dynamic elongation which could increase the risk of you hitting ledges. Balancing the need for a lower impact force depends on the kind of climbing you are doing. If you are overhung routes or sketchy trad lines, you will need a rope that gives you low impact force.

4) What does fall rating mean on climbing ropes?

Fall rating is a measurement from the UIAA which indicates the number of simulated falls it took for the rope to break. It can denote the rope's strength, and the UIAA sets the minimum number at five falls. However, you should not base your choosing on a rope on the fall rating only.

That's because the kind of force the UIAA uses is on the extreme high sides and generates forces that are hard to replicate on the practical side. In the field, it is rare to create forces over 5kN, yet the UIAA first fall tests range around 9kN, going up to 12kN on later tests.

Some cheap manufacturers create their ropes to beat these tests and get high ratings to influence buyers but lack proper handling, durability, and catch. As long as a rope meets the minimum standard, you are better off with options that have quality in each aspect. 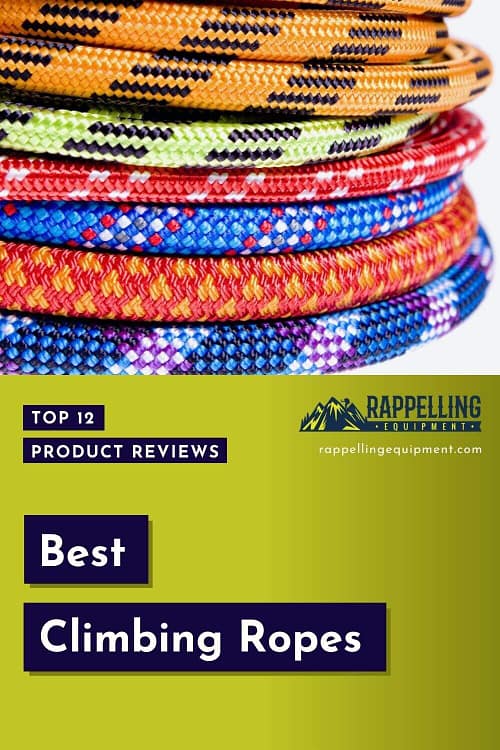 5) What is a single rope in climbing?

A single rope in climbing, as the name suggests, is one rope used on its own in the whole system, and all gear is clipped on the rope. The belayer only has to manage one rope.

It is a simple setup to use, but any rope you plan to use should be rated for single use. Usually, single ropes have a diameter starting from 9mm to 10.2mm and a length of 60m. A single rope is marked by the symbol ’ at the end of the rope.

6) What are single ropes used for?

Because of their simple setup, simple ropes are the easiest to use and the best options for beginner climbers. Their structure makes them ideal for just about every kind of climbing, including less complex trad, sport climbing, gym climbing, alpine, and ice climbing. They also have the advantage of being affordable, and they are durable and resilient against wear and tear.

The type of single rope you use will be determined by several factors, including the terrain, the length of your climbing route, and the kind of climbing you are doing. You mustn't use single ropes for twin rope or half rope setups. In case of a fall, they can generate a higher impact force, around 12kN or more, which can be dangerous to you and your gear.

7) What is a twin rope in climbing?

In climbing, a twin rope refers to a system where two ropes are used as though they were one rope. The two ropes are clipped together in every piece of gear hence the name twin ropes. The design of their function means they are individually the thinnest type of rope used in climbing, typically measuring about 7-8mm. The infinity symbol inside a circle marks twin ropes, and at times the word twin is above the infinity symbol inside the circle.

Twin ropes provide the advantage of full-length rappels, and they also provide the advantage of an extra rope should one break. The redundancy always gives you options in case of an accident. However, because they are thin, you cannot use them individually for two reasons. First, they do not have an individual rating for falls. Secondly, in case of a fall, they have high elongation, increasing the risk of hitting the ground or ledges.

8) What are twin ropes used for?

Twins ropes are used for alpine and ice climbing for two reasons. First, they allow you to abseil almost double what you could with a single rope, which comes in handy when you are getting off routes.

Secondly, you can also share the load with your partner when you are embarking on long approaches. Twin ropes are also excellent for mixed climbing. Their main challenge, though, is their learning curve for both the climber and belayer. They can also be cumbersome.

You can read our guide on half ropes vs. twin ropes for further clarity.

9) What are half ropes and double ropes in climbing?

Half ropes and double ropes in climbing mean the same thing, and you can use them interchangeably. They refer to a system where there are two ropes for climbing, but instead of tying them both into every piece of gear like twins, with half ropes, the ropes do not share the equipment. Instead, one single rope is used for one gear item, and they are often used interchangeably. It is a complex system but has its unique advantages.

The symbol denotes double or half ropes at the end of the rope. They have individual fall ratings, making them more durable than twin ropes but still less durable and thinner than single ropes. Read our dedicated guide on how to cut a climbing rope if you have to, and how to coil a climbing rope, because you will have to do so.

10) What are half ropes and double ropes used for?

Half ropes and double ropes allow you to spread the weight across the various pieces of gear, reducing the impact force on each item. This attribute makes them excellent for marginal trad placements. They are also great for general trad climbing and climbing wandering routes since they reduce rope drag.

Just like the twin ropes, the presence of an additional rope doubles up your abseil length, which is useful in alpine climbing. The extra length also helps in an emergency, and the extra rope provides redundancy should one rope break.

Their downsides are that they make for a complex system with a longer learning curve, and they can cause issues with rope management. The individual ropes are also less durable than single ropes making them vulnerable to wear and tear.

11) What are static ropes, and when do you use them?

Static ropes are ropes designed not to stretch or elongate when weighted or under a load. Because of the little to no stretch, the ropes allow for steady and bounce-free climbing, making them useful for building anchors, rappelling, and hauling loads. They are often set as the fixed rope for descent and can also lower injured people.

You cannot use static ropes for lead climbing, top-roping, or similar climbing forms as they are not tested or rated. More importantly, their little stretch makes them a hazard in case of a fall as they increase the impact force you and your gear will be under. Static ropes an perfect for rappelling.

12) What are dynamic ropes, and when do you use them?

Dynamic ropes are designed to elongate when weighted or bearing a load. Their design allows them to absorb the energy of a sudden load like what happens during a fall much faster than with a static rope, and in doing so, they reduce the peak force of the impact. As such, they reduce any risk of injury on your part and also protect your gear from the extra strain of the fall's impact.

Their attributes make them excellent for all climbing needs. They are, however, not great in cases where you need to haul a load up or where controlled climbing is necessary because of the extra bounce.

Last but not least, once you choose your best climbing rope, make sure to read our article on how to clean a climbing rope for a greater durability.

Our #1 Product Recommendation in the Best Climbing Ropes Category